This is the side of me that you don’t see very often.  Behind the paper, ink and stamps and piles of photos to be scrapbooked I’m a farm girl.  I wasn’t born this way or raised this way – I thought I was a city girl through and through.

God had different plans for me.  In 2008, I met the most kind, generous, loving man and he moved me from my custom built 3 bedroom house in an upper middle class neighborhood across the state of Washington to Snohomish and that is where the adventure begins. 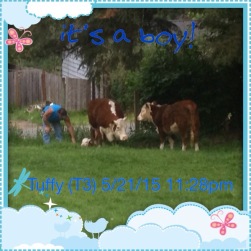 I wasn’t totally inexperienced, my paternal grandparents had an orchard in Eastern Washington, but my adult years had been spent in the financial world.  Wearing dresses and suits, belonging to committees and organizations was what I was comfortable with.

He bought me a pair of boots for our first Christmas together, not shiny black ones with a high heel and pointy toes, but they were pink – ok tan and pink – and they are so comfortable!

In the spring of 2009 he brought home two calves, I immediately named them Thelma and Louise and in 2011 they had their first calves.  After realizing that his “city girl” wife was not going to allow anything to be butchered we downsized our herd of six by that time to one.

Last night at 11:28 Thelma gave birth to her fifth calf…a bull named Tuffy (T3).  It still amazes and excites me.

I love my life as a farm chick and I love being treated like a princess by my Prince Charming.

I thank God everyday that he brought me back to my roots…there’s nothing better than a new baby calf to make you thankful for the life you lead.

2 thoughts on “Another Side of Me”